Shukumar Ray (help·info)), (1887–1923) was a Bengali humorous poet, story writer and playwright who mainly wrote for children. As perhaps the most famous Indian practitioner of literary nonsense, he is often compared to Lewis Carroll. His works such as the collection of poems "Aboltabol" (Bengali: আবোলতাবোল)("Gibberish"), novella "HaJaBaRaLa" (Bengali: হযবরল), short story collection "Pagla Dashu" (Bengali: পাগলা দাশু; "Crazy Dashu") and play "Chalachittachanchari" (Bengali: চলচিত্তচঞ্চরী) are considered nonsense masterpieces equal in stature to Alice in Wonderland, and are regarded as some of the greatest treasures of Bangla literature. More than 80 years after his death, Ray remains one of the most popular of children's writers in both West Bengal and Bangladesh. 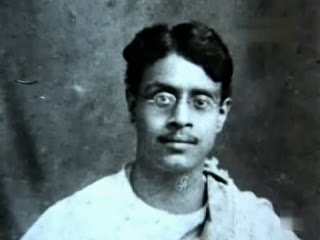 Sukumar Ray was the son of famous children's story writer Upendrakishore Ray (Ray Chowdhury) and the father of legendary Indian filmmaker Satyajit Ray and grandfather of famous Bengali filmmaker Sandip Ray.
Sukumar Roy expired on 10th Sept, 1923, at the age of 36. he was suffering from incurable disease "Kalajwar".
Sukumar Ray died on 10th September, 1923 of severe infectious fever, leishmaniasis, for which there was no cure at the time. He left behind his widow and their only child, Satyajit. Satyajit Ray .
Rabindranath went to see him in Calcutta before coming to Santiniketan and sung two songs at his request.
" Aache Duukhu, aache mrityu, Biraha dahana Lage", and
" Dukha e noy, sukha nahe go"
The last song he had to sing twice at his request.
He narrated all these during his prayer on 12th sept. at Santiniketan which was published in "Shantiniketan" , Bhadra issue. He said ; " when a man is going to die the whole energy of his life is spent in struggling with the disease and that becomes the main factor in his life.  But man is not like other animals, he is born to arrange his living in a world beyond this one. When I sat by my most dearest and affectionate young friend Sukumar Roy during his illness, I was remembering these things.I have seen many deaths but at the time of this untimely death of such a tender young boy, I have not seen any one to offer one's life at this age to the almighty god in such a peaceful way. He sung for the eternal being at his death bed. My heart is full of reverence for him.".