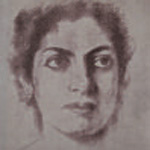 Rabindranath wrote a letter to Ranu Adhikari on 11th January 1923;
" At first I was staying in Alipore, near Zoo-garden - the British representative Governor was at a stone throw distance from that place. But in these kingdoms of the kings of Beast or human being I could not stay for long. At this moment a gentleman fron china came to meet me. He emphatically said that I must go to China. Youths of China are waiting for you. He invited me to go to north and south of China in Oct to Dec, during these three months and went away. Then an employee of a cinema company came to see me.they wanted to project my "Rajarshi" in moving pictures. On this occasion, they wanted to take a photograph of myself to be projected in that cinema. He went away after finishing his long lecture - then a gentleman came. He wanted to be a elected member of the council of ministers of government of India. he was asking my favour. Before he is going to leave the place, the organizers of "All India Musical Conference" arrived before me. They wanted me to help them in drafting the programme of action of the conference."
This was an instance of his busy schedule through out the day which he informed to Ranu.
Sisir Kumar Bhaduri paid Rs 3000/- as a "retaining fee" for "Rajarshi" for its cinematographic conversion etc.
Some intellectuals of China formed an organisation named "Peking Lecture Association" in 1920. they wre inviting western intellectuals like Bertrand Russel, Hans Driesch and others to deliver lecture in China. The gentleman who came to invite Rabindranth was not known.but this invitation inspired him to go to China. When Leonard Elmhirst went to America via China and Japan, Rabindranath asked him to inquire about the formalities of going to China. having known his willingness to go to China, the secretary of Lecture Association formally invited  him on 6 June 1923 to come to China.
Rabindranath added in his letter to Ranu ;
" I shall go to Santiniketan tomorrow. on the day after tomorrow, lord Lyton is coming to our school at Santiniketan and agricultural field at Surul.that is a huge task. He will take lunch at Surul and tea at Santiniketan.. It will take two days to arrange all these. There is also a proposal to stage a drama to collect fund for helping the flood victims. I feel tired but at the same time I have to see these things being done."
Posted by RABINDRA SMARAKA GRANTHA at 7:35 PM