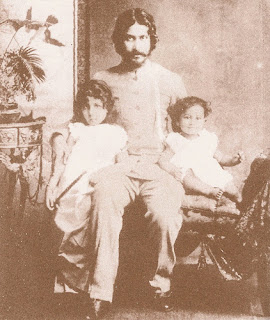 On 27 November,1888, Mrinalini gave birth to another child (male), Rathindranath.
Rabindranath's young family was at the centre of his life. He was deeply upset at having to leave them in order to go to England in August 1890. A letter that he wrote to his wife from the ship stated that he felt his spirit left his body  to come and see her. His eldest daughter Madhurilata was four at that time and his eldest son Rathi was two. He returned to home from England in November 1890. But he could not take his family with him when he first went to live in Shelidah on Zamindari work since their house was not yet built. He lived in the old family house boat called the Padmaboat.
He sent his wife and children to Sholapur in Maharashtra where Satyendranath was posted at that time.
He wrote very frequently to his wife and, as his letters show, he  waited anxiously and longingly for her reply.
The concerns he was sharing were about their togetherness, her happiness, his life, their children's future, and the marriages of their daughters. Both Bela and his second daughter Renuka or Rani were married in 1901, with one month's gap, when they were fouteen and twelve years old, respectively. He worried especially about Rani's ability to make the transition. He wrote,
Bird's build their nests with straw. It matters little to them to leave their homes and go. But we build ours with our minds . That becomes an invisible shelter in all that we do, in our work, our reading and writing , our thinking. Just as a cart makes grooves on its journey which we can feel in the swaying of our bodies, a mind involuntarily settles into the grooves it makes with the mind's eye, and we don't want to get out of them even when there is occasion for it.
Attempt was being made to get his book 'Rajarshi' in the list of approved books for schools.
Posted by RABINDRA SMARAKA GRANTHA at 7:03 AM 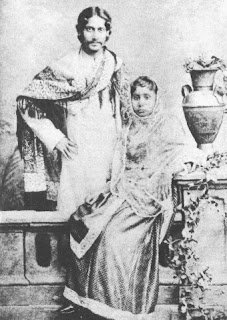 Mrinalini Devi was born in 1872 at Jessore (in present Bangladesh). Her father Benimadhab Raichoudhuri was a clerk in the estate of Debendranath Tagore. As Devendranath was a Pyrali Brahmin, it was not easy to get a girl from higher ranks of  Brahmins. Benimadhab's daughter was chosen as a bride of Rabindranath and they were married on 9 December 1883 at Jorasanko hurriedly.  Rabindranath was summoned from Satyendranath's residence. Before marriage her name was Bhabatarini. At the time of the marriage Rabindranath was 22 years old and Bhabatarini was 12. She was quite thin at that time, not very good-looking and was almost illeterate with an old-fashioned outlook. To speak frankly, she was not a good match for Rabindranath. In an attempt to groom her, she was admitted in Loreto School. Rabindranath was very caring and dutiful.  Five months after the marriage, Kadambari Devi,  wife of Jyotirindranath, committed suicide leaving a lasting effect on Rabindranath.
On 25 October 1886, Mrinalini gave birth to her first child Madurilata, nicknamed Bela, in Kolkata.
Rabindranath went on a family tour to Darjeeling with his wife, daughter, sister, and nephew. 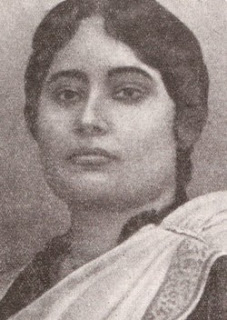 Posted by RABINDRA SMARAKA GRANTHA at 7:26 AM 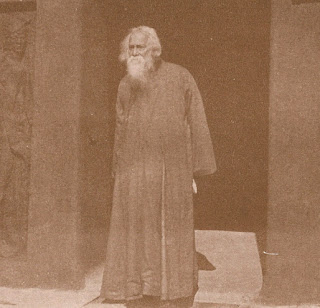 Uma Dasgupta in her book, 'Rabindranath Tagore-my life in my words', gave a brief description of the natural environment of the school at Shantiniketan.
"The Ashram is situated on a vast open country, bare up to the line of the horizon except for sparesely growing stunted date palms and prickly shrubs strugging with anti-hills. Below the level of the field, there extend numberless mounds and tiny hillocks of red gravel and pebbles of all shapes and colours, intersected by  narrow channels of rain water.Not far away towards the south near the village can be seen through the intervals of a row palm trees the gleeming surface of steel-blue water, collected in a hollow of the ground. A road used by the village people for their marketing  in the town goes meandering through the lonely fields, with its red dust staring in the sun. Travellers coming up this road can see from a distance on the summit of the undulating ground the spire of a temple and the top of a building,, indicating the Shantiniketan ashram, among its amlaki groves and its avenue of stately sal trees.
Rabindranath wanted to run his school in the model of the ancient hermitages with no luxuries, the rich and the poor being alike, will live like ascetics. But he did not find any right teachers."
He had to sell all the copyrights of his books, and everything he had in order to carry on with the school.
As per the instruction of Brahma Bandhab Upadhyay Brahmacharjashram was formed. Rabindranath delivered his first lecture in the New Year in the sacred place. But Brahmabandhab and Rebachand discontinued from the Ashram and Monaranjan Bandyopadhyay was appointed as Headmaster.  Tuition fees were cllected from the month of July 1902.  Until then there had been no tuition fee.
A Japanese student came to learn Sanskrit.
Posted by RABINDRA SMARAKA GRANTHA at 7:20 AM

The five students present on the occasion were renamed as Satyabrata, Abhoybrata, Punyabrata, Mangalbrata and Brahmabrata. They had to pray to god at least once in a day and recite the Gayatri mantra given to them.
in the evening prayer Rabindranath, Chintamani Chattopadhyay, and Shambhunath Gadgadi took the seat on the dias. Rabindranath gave them advice after the prayer.
Who were the first students is not very clear. Rathindranath, the elder son of Rabindranath, was one amongst them. He was 13 years old. He wrote that it was a problem for his father to collect students at that time. He asked Brahmabandhab to assist him in this respect. Brahmabandhab sent four boys from families he knew. Rathindranath remembered that two among them were the sons of a renowned businesss family of Nan. The autographer of Rabindranath gave the list of students as follows;
1. Gaur Govinda Gupta (became professor of philosophy in Rangpur College),
2. Asok Kumar Gupta (son of the same family),
3. Yogananda Mitra (a cousin of Ambikacharan Mitra, prof. of Philosophy)
4. Sudhir Chandra Nan,
5. Girin Bhattacharya,
6. Rajendranath De,
7. Premkumar Gupta,
8. Rathindranath Thakur,
9. Shamindranath Thakur, and
10. Santosh Chandra Majumdar.
Amongst the teachers there were Reba Chand, Shibdhan Bidyarnab, Jagadananda Roy, and Shasi Bhushan Roychoudhury.

Philosopher Brajendranath Seal (1864-1938) was also became close with Rabindranath. Rabindranath wrote to Pramathalal that he was busy writing critical essays on Kumarsamvab and Shakuntala  to discuss about literature and society  in the context of Indian Idealism. He did not have any time for writing on education in Bangadarshan. Perhaps that would be done in the next issue. In fact, he was not in favour of discussion regarding his school. He imagined only a limited number of students. They would work there as far as practicable.
It could be mentioned here that The Unity and Minister, the mouth peace of  Nababidhan Samaj, in its issue of 13 Oct 1901, wrote an essay about the Brahmacharyasharm, titled Pilgrimage to Shantiniketan of Bolpur', the following lines ,
The latest addition is a Brahmavidyalaya or a school for imparting secular and religious education to students in the national style. A boarding house will be opened and there shall be accomodation for 12 students who would learn Sanskrit and Brahmacharya according to the Vedic idea. English, Mathematics, History, upto the Entarnce Course, will also be taught.
It was not clear who wrote this but the person came to Shantiniketan before writing this. 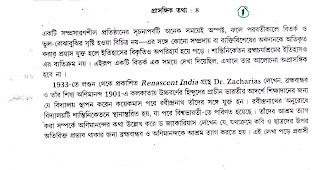 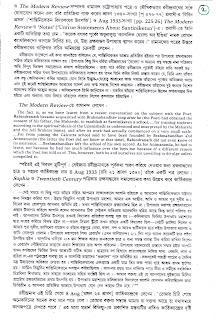 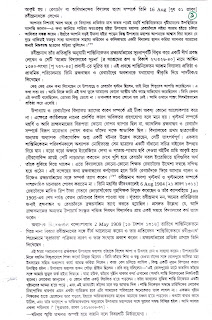 Posted by RABINDRA SMARAKA GRANTHA at 7:51 AM 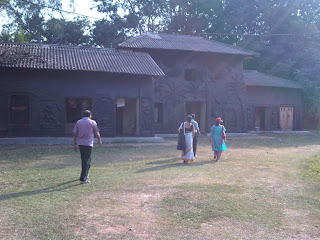 Rabindranath wrote a letter to the youth leader Pramathalal Sen (1866-1930) who was the elder son of Nabin Chandra, the elder brother of Keshab Chandra Sen. Under the influence of Keshab Chandra Sen, Pramathalal became religious-minded like his elder brother Nandalal, Bhabani Charan Bandyopadhyay (Brahmabandhab), Sadhu Hirananda etc. and became a member of Eagle's Nest.  Binayendranath Sen and Mohit chandra Sen were  energetic members of Nababidhan Samaj. Pramathalal and Pratap Chandra Majumdar along with them formed an organisation named Prayer Meeting Band. He was the first recepients of the scholarship (1895), namely Manchester,  introduced by 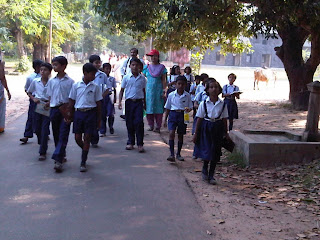 British Unitarian Association. The source by which Rabindranath was introduced with Pramathalal was unknown but he had communication with the three persons, Pramathalal, Binayendranath, and Mohit Chandra. Mohit Chandra was a distant brother of Nagendranath Gupta. Benimadhab Das wrote that Pratap Chandra was a great personality and Rabindranath was also attracted to him and the poet used to  come to his house - the "Peace Cottage".  He remembered with pleasure the afternoon when some of the Prayer Meeting Band were gathered round Rishi Pratap Chandra, listening with rapt attention to his slow mellow voice pouring out his deep spiritual thoughts in poetic language, all his own. Suddenly there was a gentle stir,- "Ah! Rabi Babu is coming.Rabi Babu is here."  A tie sprang up between the Poet and Prayer Meeting Trio, which gradually grew stronger with time.
On the occasion of 11th Annual ceremony of Paus Parban (7th Paush, 1901) and after the morning prayer in Santiniketan, Brahmacharyashram was inaugurated.Brahmabandhab, Rebachand etc were present as teachers and students coming from Calcutta and other respected guests were present. A car was hired on 4th Paush to bring Satyaprasad, Dinendranath, Singer Biharilal Chattopadhyay  etc. The Magistrate of Birbhum district was also present. Prasanta Kr. Paul mentioned in his book that Rs.3060.50 was spent on the occasion which he discovered from the cash book of the Tagore family.  Rabindranath himself initiated the students by reciting a sanskrit sloka, 'Shreyan byasohsani swaha' (let me be glorious rather than becoming a rich man) and explained the glory of the ancient monk's virtues. 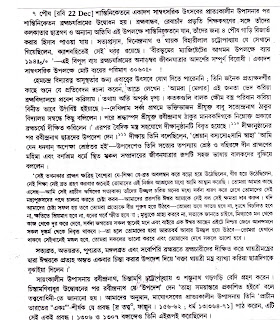 Posted by RABINDRA SMARAKA GRANTHA at 7:11 AM

By 1893 Rabindranath turned his attention to Santiniktan school after withdrawing his attention from Swadeshi movement. Later on Rabindranath founded the Shantiniketan School in his father's Ashram at Shantiniketan with 5 students, one of the student being his own son Rathindranath,on 22nd Dec  1901.At first it was started with his meagre funds and no tuition fees were collected. It was located within  two miles from the Bolpur Railway station on the 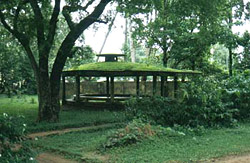 East India Railway line.  The school had the advantage of being situated in the heart of nature but not too far from the city. The girl's school was added in the year 1908. But it did not survive for more than a year owing to a tragic suicide of a girl student.It was started again in 1922, as a separate wing for girl.
About the foundation of School at Santiniketan, Prasanata Kumar Paul, author of Rabindra Jibani, gave the following information.
A book written by Dr. Zacharias titled Renascent India published in London in the year 1933 wrote that Brahmabandhab and his disciple Animananda started a school in Kolkata to teach the upper class Hindus about the old ideas and traditions of ancient India in 1901. A few months later Rabindranath joined  them and subsequently requested them to shift the school to Santiniketan which in due course converted to Viswabharati University. Dr. Zacharias further stated that Brahmananda and Animananda had to quit the Ashram as the poet had strong influence on the students.
On learning this Ramananda Chattopadhyay, editor of Pravasi and The Modern Review, after interviewing Rabindranath  expressed his opinion about the incident.This was published in Pravasi in Shravan issue of 1340 in the column "Bibidha Prasanga". The controversy was explained by Amiya chakraborty,the personal Secretay of Rabindranath in the following lines,
" Rabindranath said , in short, to inform that after the establishment of Ashram in Santiniketan Rabindranath met Brahmabandhab Upadhyay in Calcutta, who was reviewing   successfully and efficiently some poetry of 'Naibedya' and other writings of Rabindranath. At this Rabindranath was pleased and was attracted to him. When they met each other Brahmabandhab expressed his willingness to join the Ashram with one of his friend, Animananda since he had past experience of serving in such a institution because they were  conversant to the ideals and purpose of Ashram. Rabindranath invited both of them to join. Rabindranath was not acquianted with Animananda. So long as they were in Santiniketan their service were beneficial to the Ashram."