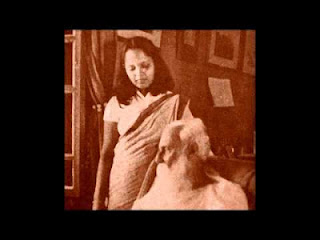 The most important incident in Rabindranath Tagore's family was the inclusion of a new member . The couple, Rathindranath and Pratima, was chidless. They tried to make good their loneliness by some pet dogs or cats. But in the year 1922 they wanted to adopt a child to make up their solitude.Rabindranath gave the name of the child to be Nandini. The detail of the incident was described by   Nandini herself;
" I donot exactly know the date on which I came to Santiniketan where my parents lived permanently. I heard that when I was of 10 months old my parents handed over me to Rathindranath. My parents lived at at a place near Gujrat. My father Chaturvuj Damodar was a business man at that place.He was a follower of Rabindranath, my grand father. They were  regular visitors of Santiniketan  and after some time they stayed there for many days. My mother who gave my birth was ailing for ever. My new mother (Natun Ma), son-in -law of Rabindranath and wife of Rathindranath, Patima Devi , took me from the lap of my mother and looked after me with her motherly affection. I was very ill at that time and there was no hope of my livelihood. My present mother Pratima Devi asked my grand father Rabindranath for her permission to adopt me. So far as I remember that was on the year 1922 when I became a member of Tagore family."
Rabindranath called her by many names affectionately. Mainly by two names, "Pushu", probably came from "paushya" and another Poupee, a French word meaning doll. This name might have been given by the French Artist Andree Karpeles, who came to Santiniketan at the end of Nov,1922. This name was first revealed in the letter written by Rabindranath to Karpeles on 13th March, 1923.
Posted by RABINDRA SMARAKA GRANTHA at 10:33 PM